Hey everyone! I’d meant to have something more for you all today. However, I got a bit too wrapped up in cleaning my house. I needed to capitalize on the fact my hubby and son were home so I could put them to work as well. Instead, I’ll give you one more little sneak peek of Scars. This is book 2 in the Black Ops series and will be coming out in a little over a month. You can pick up book 1, Tattoos, here and on Smashwords I am giving away a free short story, Emergence. Those should set you up quite well when Scars releases.

His plans were derailed on his way back to Delarin Station. As Shawn reached Deros’s orbit, two fighters popped up from the moon’s shadow and opened fire without warning. One scored a hit along his port side before he had a chance to react. Shawn activated the deflector shields and resumed manual flight control cursing at the pilot who dared damage his new baby. 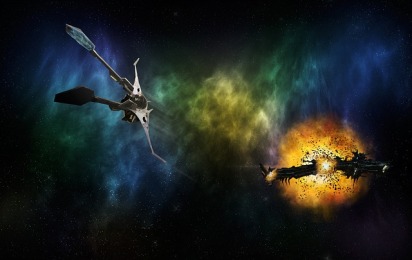 The two fighters banked and rolled away as they flashed by Shawn before looping around to find another angle of attack. It was clear the game wasn’t going to end until one side or the other lost. Shawn was determined it was not going to be him. At least not that day.

They roiled through space, rolling and diving, exchanging fire. A couple times Shawn tagged the other fighters, but never in any vital areas. The two pilots were damn good, which caught a sub-conscious part of Shawn’s mind. Minutes dragged by as they tumbled through space. Sweat soaked his helmet and trickled down his back. Shawn knew fatigue would catch up with him soon, and with two-to-one odds he would lose if something didn’t give soon.

Shawn pulled one of his maneuvers Eli claimed were suicide attempts in disguise. He banked and locked on a collision course with one of the two fighters. The deflectors on both fighters kept any direct fire from doing damage to the ships themselves. As the other pilot tried to evade, Shawn followed.

“Gods I hope this works,” he muttered as proximity alarms began to howl and scream.

He acknowledged and deactivated the alarms. With one eye on his distance and speed

readouts and the other on the head up display, Shawn made some rapid mental calculations. At the last nanosecond, Shawn banked hard praying the Torrent responded the way she had on his way out to Makeb and then some.

The fighters themselves didn’t touch, but the deflector shields did. The maneuver worked. The other fighter’s shield shorted out. Shawn pulled a turn tight enough his vision hazed toward darkness despite the inertial dampeners in the Torrent. But he found the enemy fighter and triggered his guns. It evaporated in a brief ball of fire.

But it also cost Shawn. The power to his deflector shield was down to less than thirty percent. The odds against him surviving were continuing to stack up against him.