Hey everyone! I know we’re a long time from Samhain yet, but I stumbled across this little story I’d written a long time ago and thought I’d share it with you. Seems fitting for a dark winter’s night like I’ve got right now. I’d love to hear what you think!

The woman gestured as the firelight flickered around her whitened hair. “Come, children. Gather round and I will tell you a tale.”

The children crowded around and settled in the grass, slices of apple and fresh bread in little hands. When they grew quiet the woman continued.

“Samhain is a time when the veil to the Otherworld grows thin. Spirits come back to 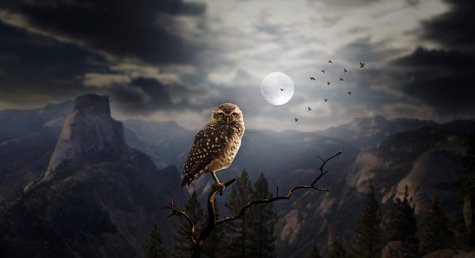 roam this land. But, sometimes, other things come, too. Creatures who live in the Otherworld.”

“Once, many years ago, a fairy came through. Not the tiny creatures called fairies now, but a creature tall and beautiful. She had magic, strong magic, and she was curious about this world.”

“Why, Maimeo? Why was she curious?”

“She wanted to understand why the spirits of the departed came back here, child, so she followed them across the veil. The clans laid out gigantic feasts for the spirits. Bonfires as thick as fireflies flickered across the countryside. Music, guises, and games abounded. She was so drawn to this world that she did not watch the time. What happens when dawn comes after this night?”

Several children waved their hands before one boy called out. “The veil closes and the spirits cannot pass through, Nana.”

“Yes, little one. Those spirits trapped here must remain until the veil thins again. And the same happened for the fairy. Only, she was not meant to live here.”

She leaned forward, shadows dancing across her face as she continued the tale. “She had to survive, so she found Clann Carthaigh,”

The woman nodded. “It is. She asked your grandfathers and grandmothers for guest right until the veil thinned enough for her return to the Otherworld. The Clann voiced many concerns. Fairies were not known to be hard working creatures and winter drew near. They talked late into the next night before they took pity and grant her guest right.

“The fairy felt terrible that her efforts were bringing sadness, anger, and blood shed to Clann Carthaigh. She went to the chieftain and asked for one night. In that night, she promised she would end the feud between the clanns. He was uncertain about her claim but gave her that night.

“No one knows what happened next. Clann Suibhne speaks not of it to this day. But they left this county and have never returned. Some say the fairy cursed them, others say she bribed them. That is why they say to cross a fairy is bad luck.”

The children sat in silence, listening to the fire crackle and starting at shadows. They finished their apples and bread before thanking the woman and moving off to their beds.
In the firelight the woman watched, a slow smile and a glimmer of something more in her tilted violet eyes.