I’ve got a quick little short story for you tonight. This started from a prompt I’d read back in about December or so, but didn’t get finished until recently. Please enjoy!

A blond young man growled and threw the map to the deck of his little wooden vessel. He heard a sign behind him and gritted his teeth.

“Don’t say it,” he interrupted.

“You’d probably be lost if I weren’t along to show you the way.”

He spun and glared at the blonde girl behind him. She grinned back, a sparkle in her hazel eyes.

Nekila stuck her tongue out at him before answering. “Because it needed to be said. I know the gods said you were the chosen one. But seriously, Richa? You’d have gotten lost the moment you left the island if it weren’t for me. Why do you think the gods sent me with you?”

Richa sighed and lifted his hands toward the blue sky. “Why, my gods? Why have you burdened me with this pesky nala?”

Nekila threw her shoe at Richa. “Now who’s acting like a nala? Besides, I noticed the lack of argument when I pointed out how doomed you’d be without me. Give up the drama, idiotes.”

She stormed down the deck of their tiny vessel and nestled herself in the blankets at the stern. Richa scowled at her as his face flushed. When she didn’t respond, he turned back to the bow. Endless sea greeted him. An occasional white cap broke up the aquamarine monotony. That and a dark line of clouds growing on the horizon.

“That bodes no good,” he sighed.

Richa set about securing their meager belongings to the deck of their vessel. Nekila 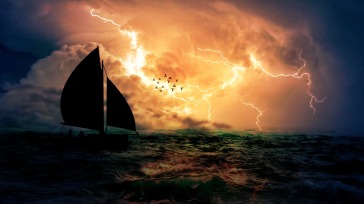 joined him as the greenish clouds bore down on them, blotting out the sun. When the storm hit, it was as if a giant reached out and slapped them around like a toy. Their boat would have been swamped within the first few minutes so viscous did the storm treat them. But Richa and Nekila had secured a tarp over the hull, sealing them in except for an opening for the mast and one person to hold the little rudder.

As the storm wore on, tossing their boat about, Richa used rope from their furled sail to lash himself to the mast. He could still reach the rudder but could also use the mast to keep himself steady and securely in the boat. Then he tossed the end under the canvas to Nekila and shouted at her. She shook her head and gestured at her ears. Richa pointed to the rope tied to his waist and the mast. Nekila nodded and secured the end he’d thrown her around her waist.

She did so none too soon, for a wave over three times higher than their mast rose before them. It hung above them for an eternity. Then it crashed down on them, tearing their boat apart and tossing pieces about. By some miracle, the rope holding Richa and Nekila together and to the mast held. They clung to each other, the wooden remains between them. Salty water choked them as they battled wave after wave. The storm seemed to have no end.

Then, it happened. Richa saw it through the sheets of rain highlighted in the flashes of lightning that danced across the cloud-filled sky. Another monster wave rolled toward them. Richa glanced up to where Nekila clung to the broken mast. Her back was to the wave. He breathed a small sigh of relief she wouldn’t see what came for them.

In the next heartbeat the wave enveloped them despite the efforts of their broken mast to climb the massive wall of water. Dark water swirled around Richa. Broken bits of wood from the mast splintered and battered him. The ocean currents shoved and yanked them around, the rope digging in painfully. Richa tried to find the surface as his lungs burned. The pressure to breathe grew with every passing second, yet the tumultuous ocean kept the surface just out of reach. Bright spots danced in Richa’s eyes even as a black haze closed in around him.

Richa jerked around, looking for the source of the clear voice logic said he could not hear underwater.

Be at peace. You have found what you seek.

A warm calm filled Richa. Nekila floated into his vision. She glowed with a golden light, calm and relaxed. Darkness closed in around him. Darkness and peace; a sense of coming home. Richa understood then Nekila had been right. They would indeed find what they needed to save their people.