I have to admit; I am so late doing this review it’s ridiculous. I’ve had my copy of Melkorka by Joshua Robertson for a long time. It took me longer than it should have to read. So of course, life conspired to keep me from getting this review written for quite a while. Oh well, here it is. Finally.

Melkorka, by Joshua Robertson, is a fantasy novel about Branimir, a Kras. Think little demon like imps for an image. They’re slaves to the Highborn, magic users who rule on Melkorka. Yet, the Highborn are making a mess of things when they trigger a demonic invasion that destroys most of the Highborn in Melkorka. Branimir ends up being the only Kras to survive and is forced on a journey hoping to find a way to win the war.

I absolutely loved Robertson’s world building skills. He created a rich, detailed world I found easy to get lost in. I thought the magic system was beautiful in its functioning. Whenever a Highborn wields magic, they pay for it in years of their lives. Anyone watching a Highborn use their magic can see the user age before their eyes. And the way Robertson built the different islands, with their own populations, creatures, and histories showed just how much work Robertson put into creating this world. 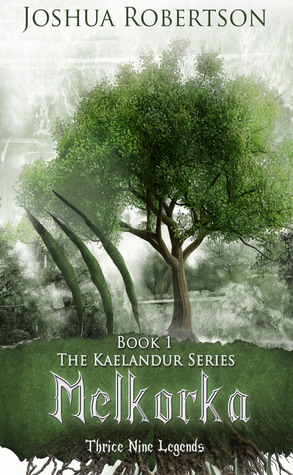 Along with the world building, Robertson did an excellent job of character creation and development. Each character felt complete and real. Branimir started as a cowering creature, to be expected of a slave, but grew to have more of a backbone than even he realized he could have. And I loved Dorofej. His calculated, old-man attitude throughout the book kept me entertained the whole while. And the rest of the Highborn had just as clear personalities, though not nearly as likable, which I appreciated.

The last thing I have to comment on is that I found the underlying moral questions in the story a beautiful addition to the story itself. Not only does Branimir get challenged in what he has always believed to be moral, the questions make the reader think about their own morals and beliefs.

There were a few times, for example in the opening chapters, where it felt like there could have been more help for the reader to understand what was going on. It opens with the Highborn about to execute one of their own for alleged heinous crimes. We are thrust so fast into the action, though, it was at times overwhelming and challenging to figure out the world and the politics of the story.

The other thing I found to be odd about this story is that even as fast as we are thrown into the action, the pacing at times felt like it dragged. I’m not quite sure how to explain this. The best I can say is that there were spots where I struggled to stay engaged in the story despite all the things I appreciated about it.

For those who love a sword and sorcery fantasy that errs on the darker side of things, Melkorka is the book for you. While I found a couple challenges reading the book, the positives outweighed them. It is worth the read, that’s for certain. You won’t be disappointed.