I’ve been in somewhat of a weird place–struggling to come up with the creativity to write much of anything new this week. I have a piece I really need to get done for an anthology box set I’m in. I’ve got the general gist of where the story needs to go to get done, but am having a hard time getting any words down to get it there. But tonight’s SwiftFicFriday got me thinking–rather dark thoughts admittedly, but at least something happened. I give you

The screen door slammed, adding punctuation to his words, chasing her into the dark night. “You’re not happy no matter what I do!”

It’s what he always said when they got into a fight over stuff at home. “How many bloody times do I need to spell it out for him? It’s not like picking up his dirty clothes or putting the dishes in the empty dishwasher is that hard.”

The river murmured to her in the distance, a soft, rippling hum just at the edge of 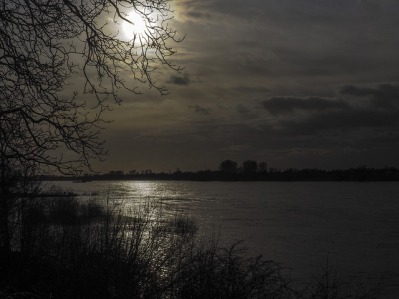 hearing. She made her way to the bank a couple hundred yards from the house. With a dark look back at the yellowish light from the back porch glowing like an eye out of the shadows, she made her way along the worn dirt trail that followed the bank downstream. Fantasies of escaping her miserable life danced through her imagination until tears slipped down her face in silence.

“Who goes there?” The tinny voice startled her out of her reverie.

“Who’s there?” she called out, her voice higher than normal.

A shadow detached itself from the riverbank. “Emily, eh? I am glad you came.”

“Who are you?” Emily’s voice tightened and rose even further.

The shadow lunged at her. It was humanoid, but with a turtle-shell on its back and sickly green skin. Webbed hands grabbed her as water sloshed from its oddly shaped head. Emily screamed, but sharp teeth cut it short as hot, crimson blood spilled into the river in an offering to the denizens there that night.