I’m finally getting a chance to breathe some, which is finally letting some words flow again. Which means I’ve got an extra special treat for y’all tonight. #SwiftFicFriday over at Fiction Trials played right into a WIP I’m currently working on. We got the picture below and 300 words to respond. After you’re done here, please follow the link and check out other responses. Then vote over the weekend for your favorite!

This is a scene from a longer piece called Seeking the Path. I call this scene:

Maroshek stepped around broken bricks and shattered glass. Bits of wood scattered throughout were charred and crumbling. So much gone in the blink of an eye. He’d been gone for just a week. And he’d come home to this. Everything in ruins.

He looked up at the peeling, broken, blue ceiling. Tears threatened to spill down his 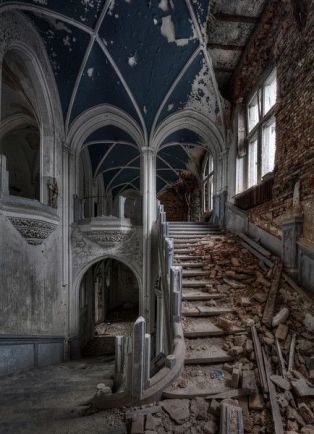 tanned face at the ruined sight of what had been his mother’s pride and joy.

“My Lord, your presence is requested at the hospital.” The guard’s voice seemed loud in what remained of his childhood home.

Maroshek took a deep breath and one last look around, knowing he would never return. It would never be the same, anyway. He turned and followed the guard to the hospital. It was one of the few buildings untouched by the second wave of raider attacks.

“Burn them all,” Maroshek muttered to himself, knowing his mother would scold him for cursing but not able to muster energy to care.

The guard showed him to the door of a tiny room at the end of a hall. Maroshek hesitated before stepping into the room. Seeing his father—his strong, military leader father—lying motionless wrapped in so many bandages felt like a slap.

When Maroshek reached Lord Kerhan’s side, his father turned his head to face Maroshek.

“Is it done, son?” Lord Kerhan’s voice rasped out the words in a whisper.

“Yes, Father. The Pledging is complete, even though Lady Jaylen is only six years old.”

“Good. This is now your most sacred duty. You must not fail in this.”

Maroshek shook his head. “I won’t, Father, I swear.”

“I love you, Maroshek. You’ve made me proud.”