Ren the Red Falcon by Joshua Robertson is a fantasy short story that gives readers a glimpse of Ren’s life as a slave girl. However, things go from bad to worse when barbarians arrive to disrupt life in the encampment where she’s held captive.

Joshua Robertson has a talent for thrusting the reader into the middle of the story, yet it 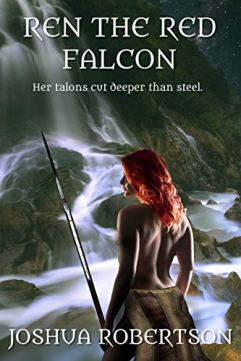 still starts at the beginning. I know that doesn’t make much sense, but that’s what it is. The story seems to start in the middle, with Ren being held as a slave to cruel captors. Yet, it’s also the beginning of her chance at freedom. And this push-pull feeling of the story having left the reader behind, yet it’s just starting is balanced well, something I feel is a strength of Robertson’s.

I also like how flawed the characters are. This adds so much dimension to them, making them so much more believable. Ren comes across as believing herself much more capable of things than what she seems to be able to do. Robertson portrays her hesitation and struggle well. Her fellow captives have a pettiness about them despite all of them being victims together that adds dimension to these supporting players. Even the barbarians are distinct people who are at turns cruel, kind, and just as flawed.

Finally, I loved the way Robertson left the ending. I won’t say too much here because I don’t want to spoil anything. Suffice it to say, this is not necessarily a happily ever after ending, nor is it one where everything is clear, and all tied up in a neat bow. There are questions remaining and a clear sense that the story goes on even though this part of the story ends. And the ending is believable, fitting what happens throughout the rest of the story even though it’s not quite what one would expect.

I thought there were a few parts that felt a little rushed. For example, there’s a big battle scene that provides an opportunity for escape. While I’m not advocating drawing out the blood and guts horror of the battle, this seemed to be a place where the story could have slowed a bit. Slowing the pace would highlight a little more the precariousness of Ren’s emotions around freedom and the future facing her with the barbarians to me. Another place that seemed a bit rushed was toward the end. I don’t want to say much for fear of spoilers but will say I feel like it could have been elaborated on a bit more in contrast to earlier segments.

As with all stories that draw me in, I wish there had been more to Ren the Red Falcon. While I learned about the character, I want to know more. I want to follow those threads left hanging to see what happens. The grittiness and dark feel is refreshing in a genre that leans toward the “yes this was bad but we now have a happy ending” style endings. I would give this a 4.5/5 stars, so rounded up to give a rating allowed on various websites—5/5. If you love fantasy, check this story out.